Fredonia’s WCA Home was founded in 1892.  2017 marks our 125th year providing a beautiful and secure living environment for the elderly women in this community.  In honor of our milestone anniversary, the Board of Directors has been delving into the extensive history of the Women’s Christian Association Home to compile a more complete historical picture.   The board is asking community members and local historians who might have relevant memorabilia to consider loaning or donating it to the home’s archives. Family lore is also welcomed.

To participate in or contribute to the history project, send an email to Board President Christine Davis Mantai email at mantaicd@fredonia.edu, or submit a message online through the website at http://www.wcahome.org/contact-us

This page will continue to be updated as more information is uncovered regarding the rich history of our organization.

The WCA Home is celebrating its 125th anniversary with a tea party open to the public, hosted at the home of Fredonia president, Dr. Virginia Horvath. This special anniversary of the WCA Home coincides with the 100-year anniversary of women’s suffrage in the state of New York. Along with tea, light snacks, and dessert, the event will also feature live music and presentations by Fredonia students, as well as raffle prizes and auctions to benefit the WCA Home.

The importance of the WCA Home extends well beyond its work today. Since the inception of the WCA Home 125 years ago, grassroots efforts of local women associated with the home fought for political equality through compassionate social advocacy, ultimately earning suffrage for women in New York State in 1917– three years before national suffrage was achieved.

“Many people pass the home on Temple Street and wonder what it is and why it’s there, so this research will answer that question in a big way,” Christine Davis Mantai, president of the WCA Home Board, says. “The home wouldn’t exist without a unique group of women of Fredonia’s horse and buggy days. Their names will be familiar to Fredonia history buffs, but those names have never been connected to the WCA Home before. Nor is it realized how much of themselves they put into the project.”

The lives and histories of these women will be on display at the tea party, telling the story of their work at the home and towards political equality for women.

“Whether born in New England or in Fredonia, our founders had many of the same life experiences: most had reached the middle class and built the beautiful homes that still exist on our village streets. They were the sisters and wives of Civil War Union Soldiers. They were well-off and yet about half experienced the death of a child due to disease. Both old and young were temperance women and believed in giving women the vote. They were devoted to the local Protestant churches, and some had teaching diplomas. None worked outside the home unless they were involved in their husbands’ businesses.”

The rich history of the WCA Home, as well as the history of the women’s suffrage campaign in Chautauqua County, is being highlighted by students in Associate Professor of English Dr. Emily VanDette’s Senior Seminar at SUNY Fredonia. “I’m delighted that my students have the opportunity to collaborate with the WCA Home and other local community partners to shine a light on local women’s history,” says Dr. VanDette. “The dual occasions of the WCA Home’s 125-year anniversary and the centennial of women’s suffrage in New York give us plenty to commemorate in the local community, especially given the large role Chautauqua County women played in the these grassroots efforts in the 19th century.”

The event will take place October 15, from 2:00-4:00 pm at Lanford House, 194 Central Ave. in Fredonia. Tickets for adults are $20 and $10 for students and children under 18. All proceeds go to the WCA Home. Event details can be found online by clicking on the teapot at www.wcahome.org, or by calling the WCA Home at 672-7961.

Descendants of WCA Home founder to be welcomed at Anniversary Tea 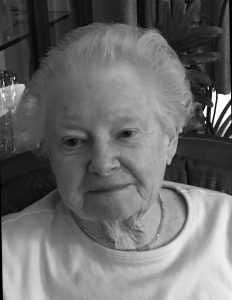 Alice Albro Meyer of Pittsburgh, PA. Her ancestors were Fredonia women who founded the WCA Home for Aged Women.

Descendants of a founder of the WCA Home for Aged Women on Temple Street will be visiting Fredonia to attend an Anniversary Tea on Sunday, Oct. 15, in honor of the home’s establishment 125 years ago. President of SUNY Fredonia Virginia Horvath will welcome 90-year old Alice Albro Meyer and family along with the public at the event in the Lanford House from 2 to 4 p.m. Tickets to the event are $20 and all proceeds go to benefit The WCA Home.

Honored guest Mrs. Meyer, who lives near Pittsburgh, Pa., is the grand-daughter of Clara Morris Albro, who, in 1882, hosted in her home several of the first meetings held by the women who formed the Woman’s Christian Association in order to manage a home for aged and indigent women in the region.

Fredonia’s Morris and Albro families were closely connected to the progress of the Fredonia Normal School in the latter 19th century, as well as the startup of the WCA Home.

The first benefactor of the WCA Home was Marion H. Morris, who was married to Lorenzo Morris, an attorney who was president of the Fredonia Normal School board of trustees. Mrs. Albro was the daughter of Lorenzo Morris and his first wife Fanny Strong Morris, and grew up in their home at 67 East Main St., Fredonia. She married Samuel H. Albro, a professor at the Fredonia Normal School who was later named president of the Mansfield State Normal School in Pennsylvania.  The Albros lived at 300 Central Avenue in Fredonia for many years and it was here that some of the first meetings of the WCA were held.

It was Mrs. Albro’s stepmother, Mrs. Morris, who organized the group of women in the village to create the WCA Home for Aged Women.  Although she died five years after her vision was realized and the home opened its doors, Mrs. Morris left a bequest that ensured its robust beginnings and immediate viability.  Her two step-daughters, Mrs. Albro and Emily Morris Russell, were both active on the board and served as officers after Mrs. Morris died. As younger women, both Morris daughters signed the list of crusaders of the Fredonia Women’s Christian Temperance Union in 1873 after a speech at the Fredonia Baptist Church.